I’ve had grand garden dreams for ages (mentioned on this blog over the years), and yet I’ve never made them happen. [Insert a million reasons why here.] I did make a start on it a couple of years ago & even had a celosia go bonkers: 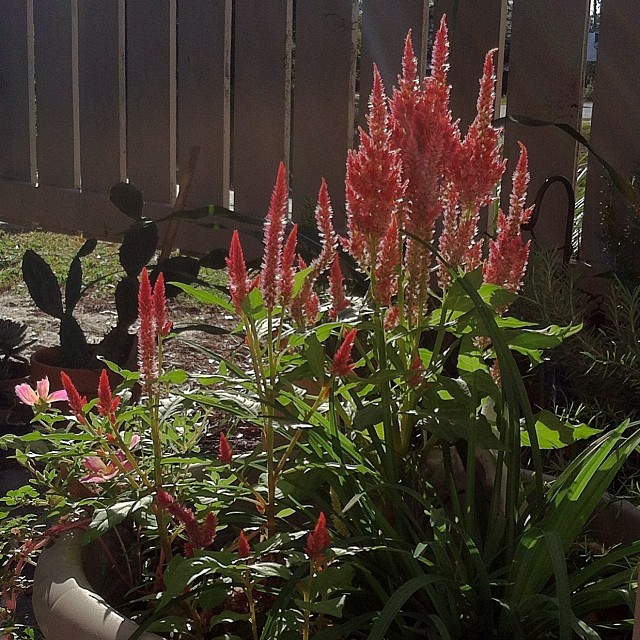 When I moved to where I am now, I was happy to have a bit of outside space (for an apartment, especially). I brought a few plants with me, succulents & a rosemary plant & a few others. The rosemary actually put down roots & grew huge: 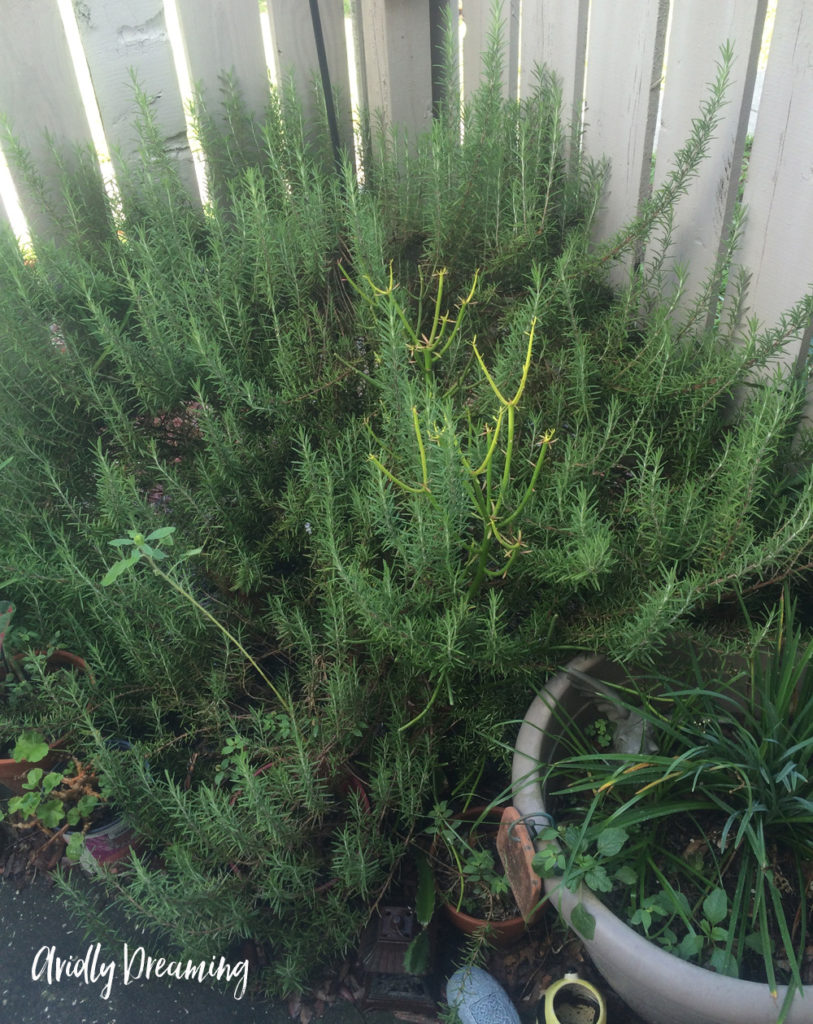 And look at the firesticks (one of my succulents) growing up in the middle, lol.

Sadly, the rosemary died a few months ago. :( Boohoo! I have no idea why, as she’d been really large & robust for the past four years. But died she did. My succulents are still soldering on, although they need a lot of TLC.

I’d started thinking several months ago that I’d really like to finally, finally do up my patio & front-of-home with as many plants as I can make fit. I want to fix up the succulents & roots lots of new ones, get lots of new plants, and just generally fill it all to bursting.

And soon after those ideas were blooming (pun intended) in my mind, a garden fairy started to make it happen!

I have a neighbor who loves to garden. He lives in one of the really small studio apartments here, and I get the sense that he’s not had an exactly easy life, but he loves plants and is good with them. The entire front of his place used to be a garden – as in plants-in-the-soil – but then he changed it all up & now has different ones mostly in pots. He’s the kind of gardener who takes cuttings from everywhere, roots them, and bam – has tons of plants.

He started stopping by to chat a while back when he noticed my rosemary & asked if he could come by at times to snip some off for cooking. I said sure; the plant was so huge, there was more than enough. Rosemary for everyone!

He then decided to take some cuttings to try rooting it, and it worked; here’s his cutting that he took from me: 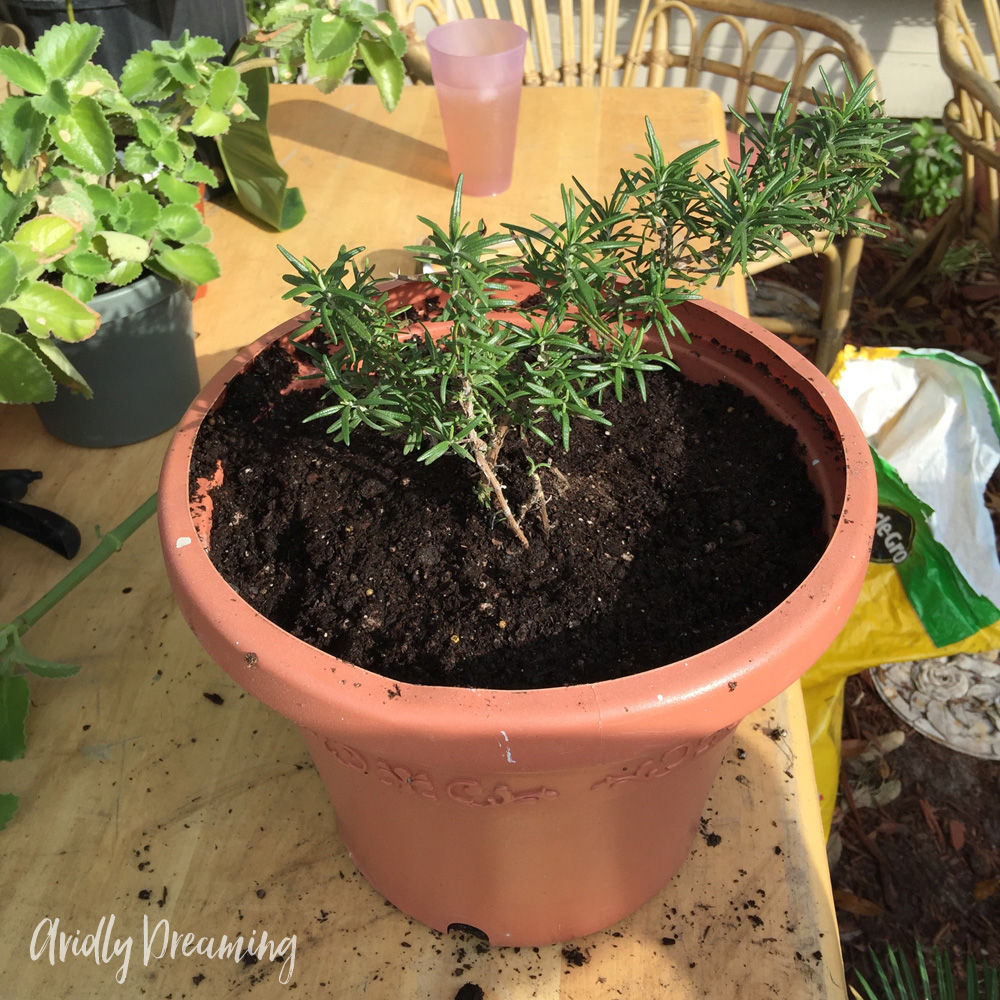 So the big rosemary bush is gone, but its cutting is doing very well at my neighbor’s place, and once it gets large enough, he’s going to do another cutting & root it & give it to me. I’ll be a rosemary grandma, ha!

So then a few weeks ago, he stopped by to bring me a young philodendron: 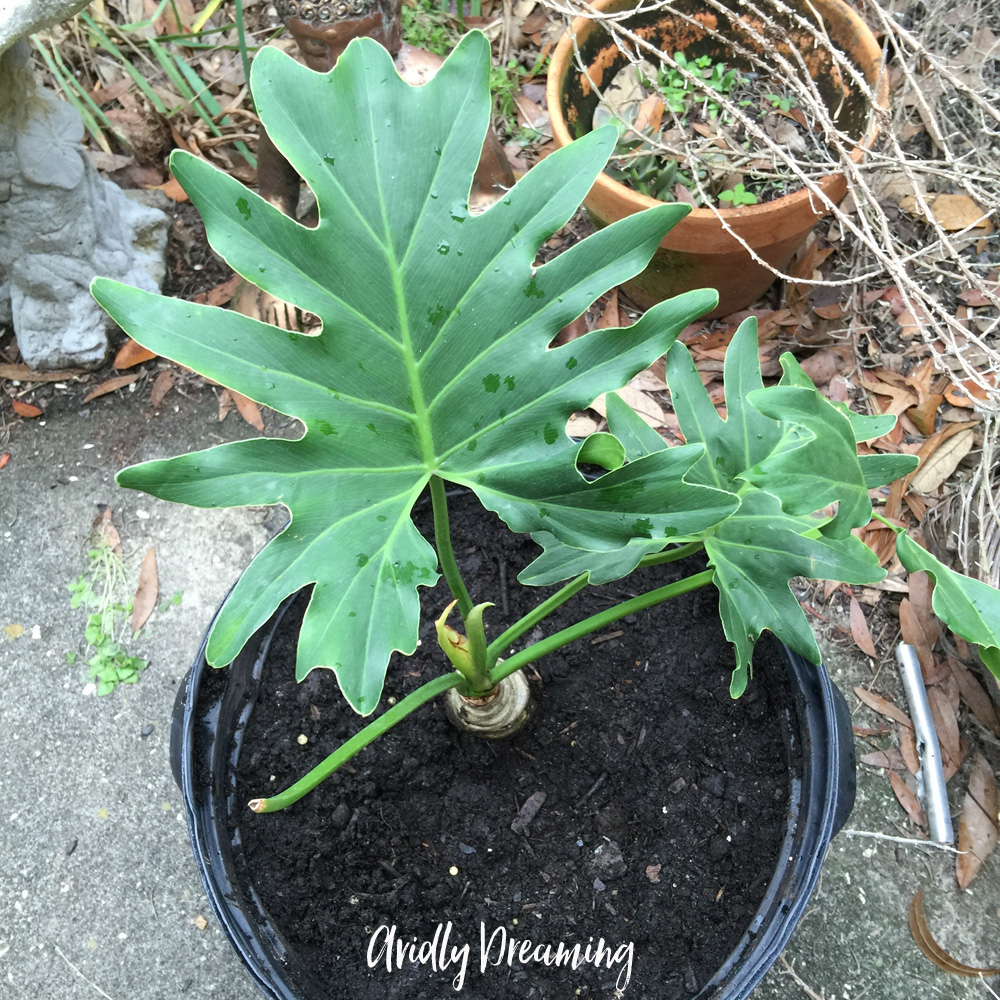 And soon after, a baby elephant ear: 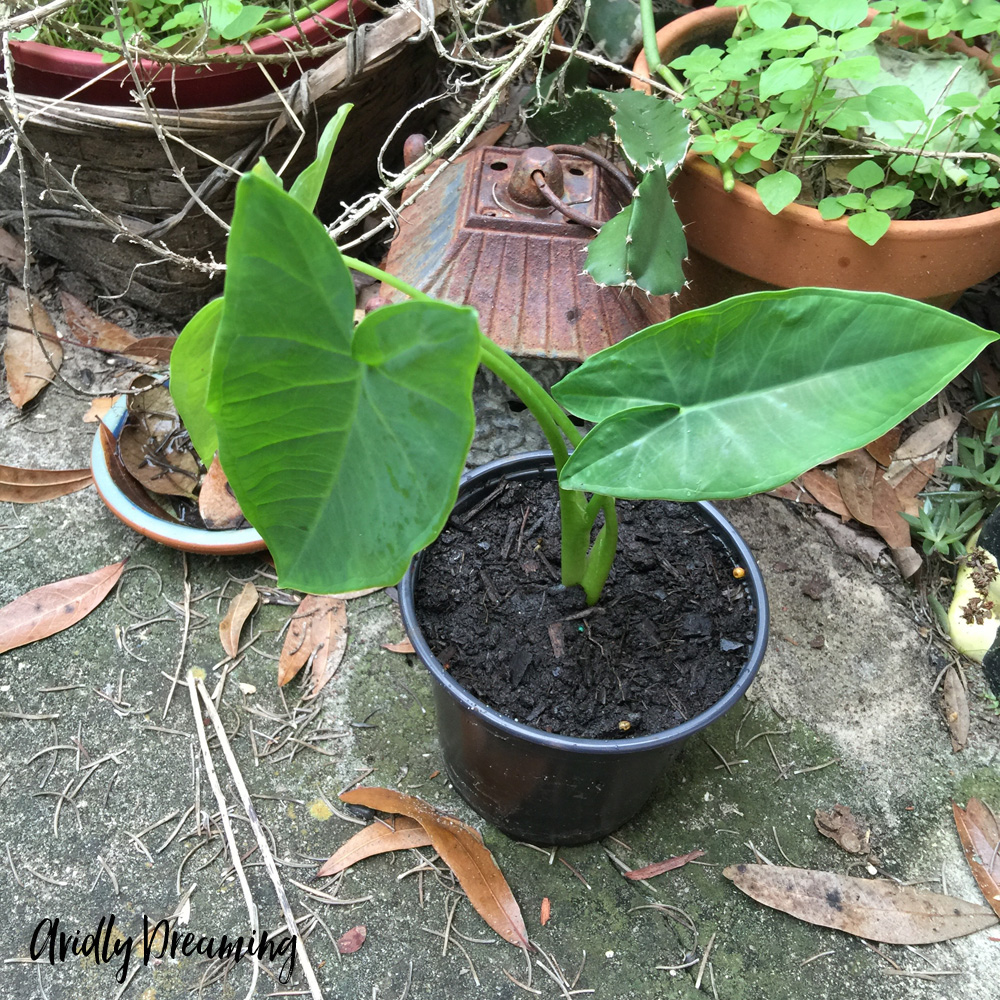 And a cutting of an herb I’ve yet to identify (which hasn’t been happy with the cold snaps we’ve had, and may not make it): 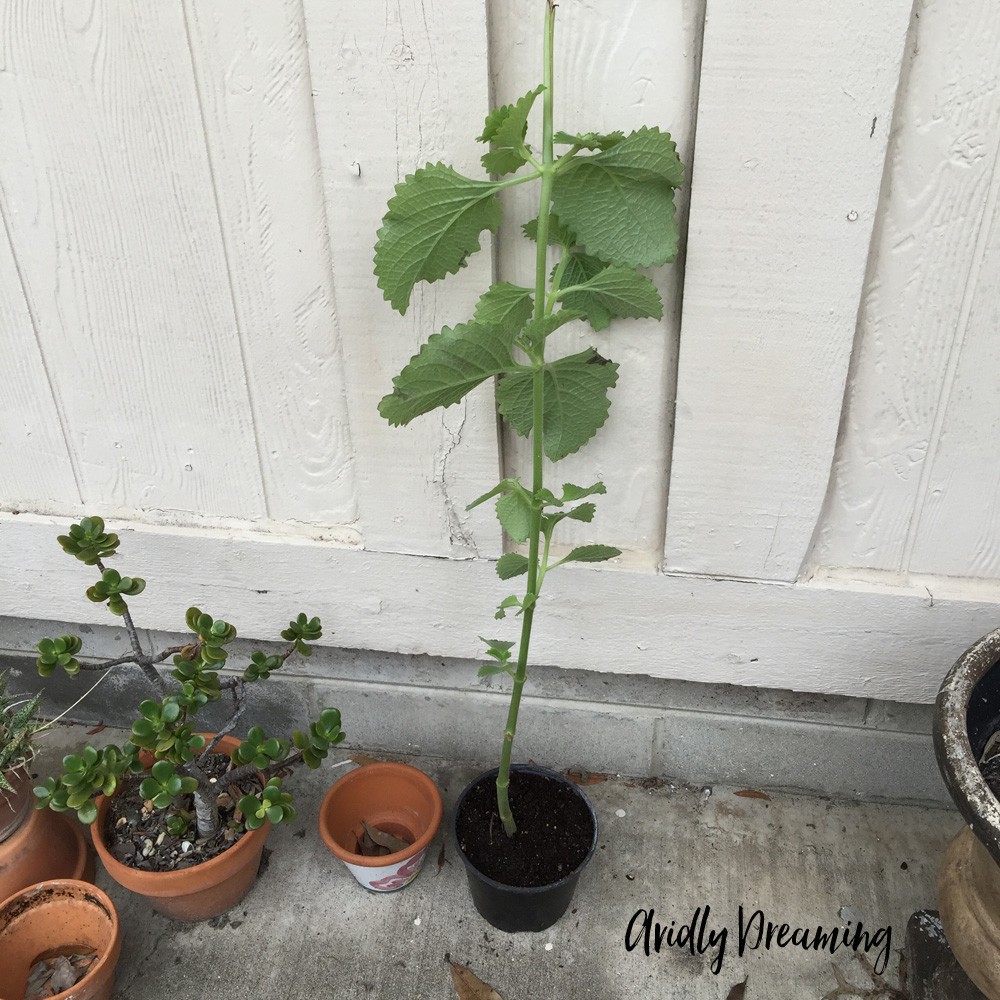 And then a couple of days ago, he brought me a baby tomato plant: 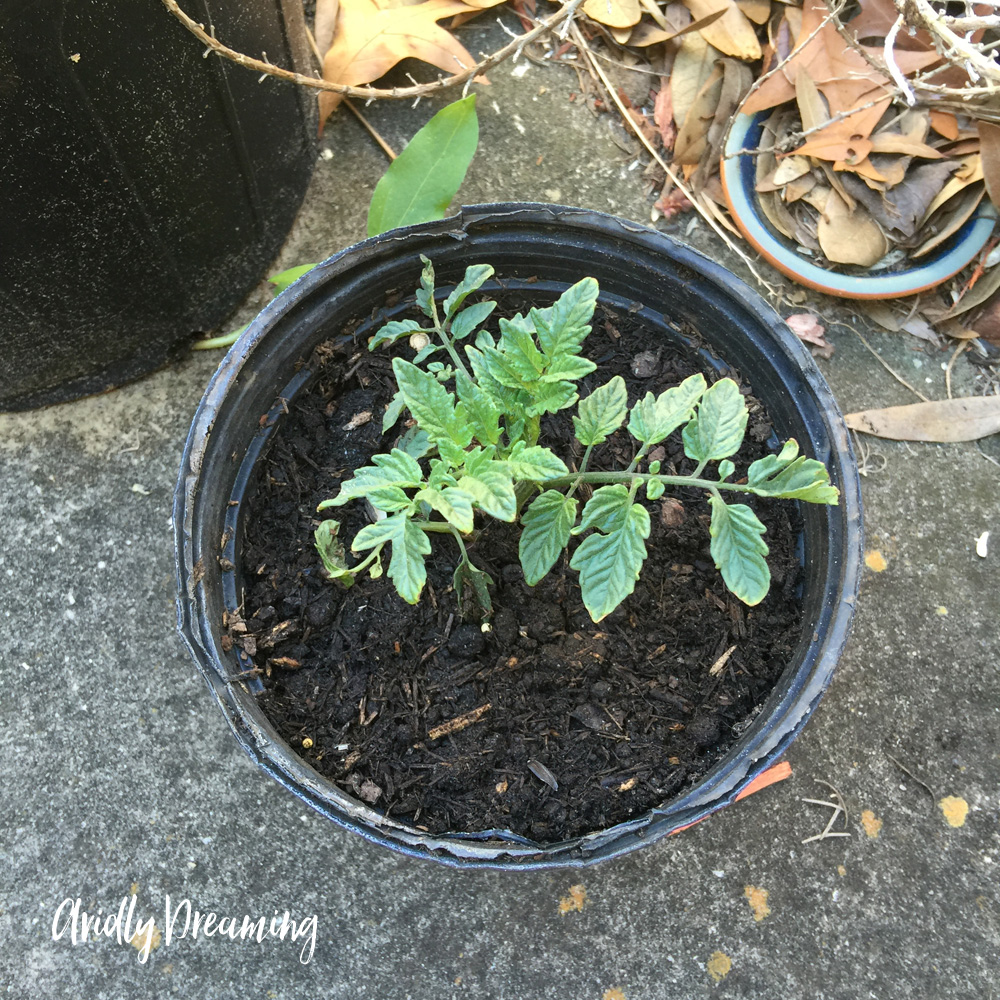 I’ve got to say that having a gardener for a neighbor is simply the best…especially one who likes to share his plants! Most people here are not gardeners, so I think he’s just happy to find others who enjoy plants like he does.

(And my mother is doubtless watching all of this and chuckling…she was a gardener, almost a master gardener, and always had plants everywhere…she was the kind who rooted everything, too. I know she’s got to be loving seeing me start to finally exhibit some of her garden-ness…or perhaps she’s the one whispering in my neighbor’s ear to bring me plants…ha!)

And to add to all the plants making their way to me, in front of my fence, a little volunteer has popped up: 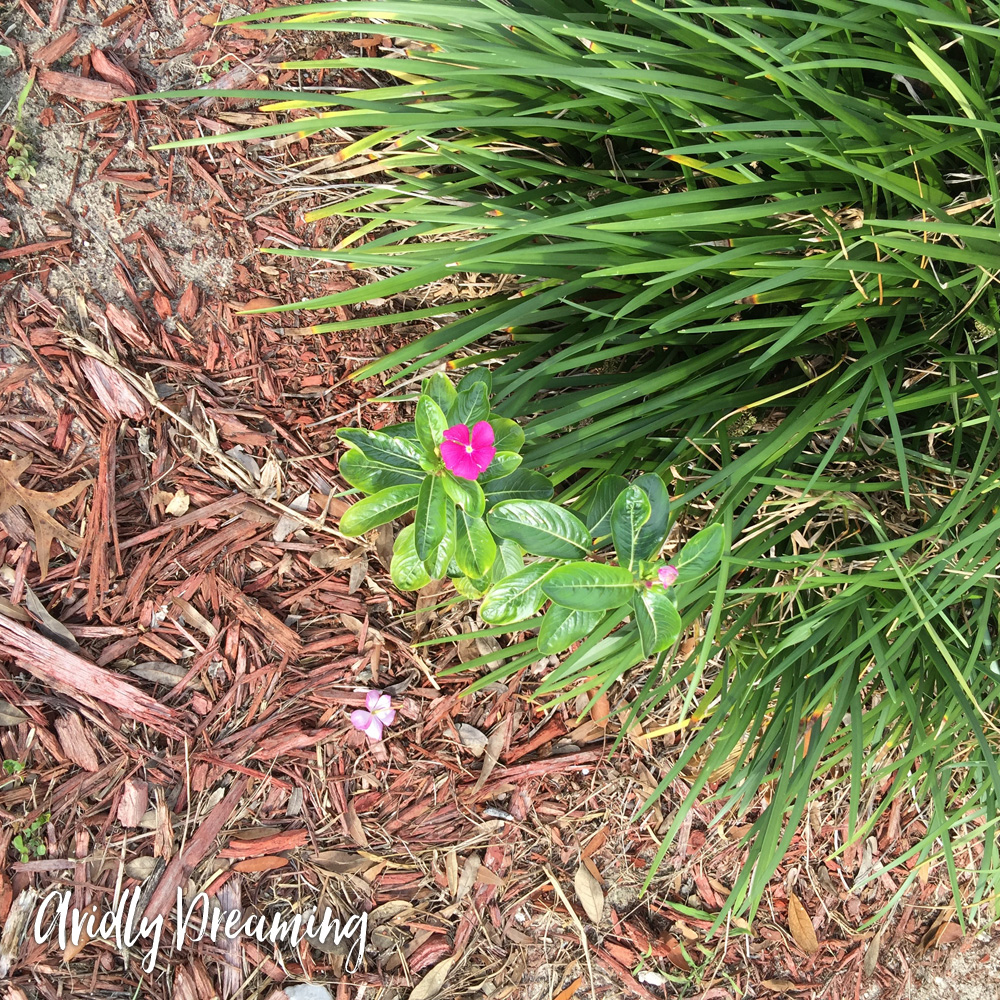 So it seems my garden dreams are underway! And without any deliberate, specific plans on my part. I just said to the universe, “I’d like to finally have a big garden in 2016…” and the universe seems to be saying, “Ok!”

Hello hello! Welcome to the first Klatch post of 2016! (For more about what the Klatch is, see this page.)...