The day has arrived! It is MAD TEA PARTY time!

Thank you to the wonderful Vanessa at A Fanciful Twist for the madness!

Are you ready for the muchness fun-ness?

Fair warning: It’s about to get really mad in here.

The invitation the Korknisse and I received said to follow the white rabbit down Magic Portal #374. Your invitation might have different directions.

I’ll see you down there! But before we all head out, want to hear how I came by this getup I’m wearing? It happened like this…

At first, my head wasn’t too clearly in the Mad Tea game. You see, I was thinking too much about my fabulous new black and white dress from Shabby Apple. It has everything I love: boat neck, high waist, A-line skirt that hits at the knees. Totally flattering and the kind of thing that gets me digging into my closet to find forgotten accessories because I want to try “everything” with the dress…and I’m not really a “clothes” kind of gal (srsly). But when I like something, I really like it, and want to have fun with it.

And this dress was screaming “dress up!” to me. So I did. I donned pearls, lovely shoes, a vintage-look purse, and a hat—of course!—and was ready to go!

The Korknisse, however, refused to allow me to go to the party like that.

“It’s a Mad Tea Party,” they chorused, rolling their cork eyes at me. “C’mon, you can do madder than that!”

Duh! Silly me! I was so excited to wear my new dress that I wasn’t thinking madly enough. So I went to change.

I switched it up & said to the Korknisse, OK, I put on more sensible shoes, trendier accessories, and a casual hat! NOW can I go to the party?

And they agreed that this was at least more casual, but still not remotely mad enough for what they expected the party to be like.

So back I went to try again! Darn it, there is a party to go to, so no more messing around. I decided to put together the craziest outfit I could think of so they couldn’t say no again:

Sorry about the pic quality; my picture-taker roommate was unavailable, so I was fending for myself. And yes, I’m wearing a bizarre hat, two different gloves, a waist sash, tall striped socks, and two different shoes—actually one shoe and one tall pirate boot (see the laces up the back?). I think that’s a nice mix of strangeness for a Mad Tea party, don’t you?

The Korknisse certainly did! They loved it, and said that now I was ready!

I have to say that getting ready was half the fun…

Down the rabbit hole!

Finding the party took a bit longer than we’d expected. As I’ve mentioned before, the magic portals around here only open at certain times, and while we had an invitation to this party, and were told where the portal was, it took us quite a few tries to actually find it.

But find it we did! 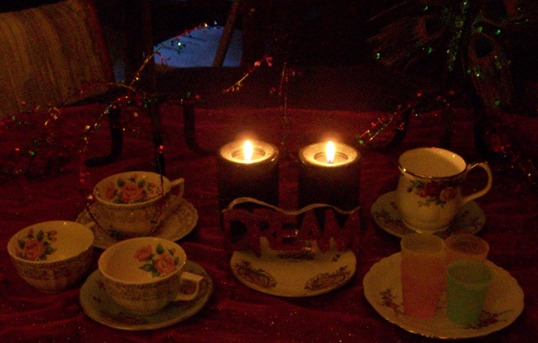 It was a slightly spooky ambiance, but hey, what do you expect when you go through magic portals and down rabbit holes to find a party?

I lit more candles and the place brightened a bit. The Korknisse ran to their cups and asked for tea: 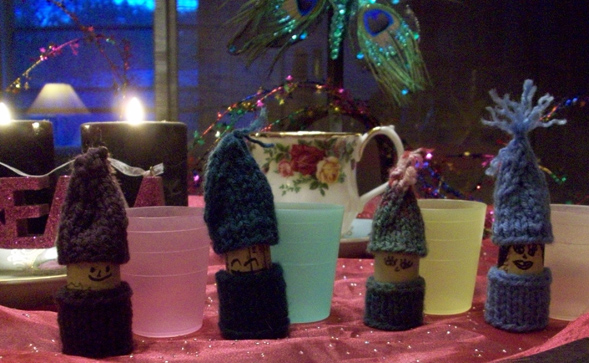 Those guys were thirsty! They drank so much they were deep in their cups… 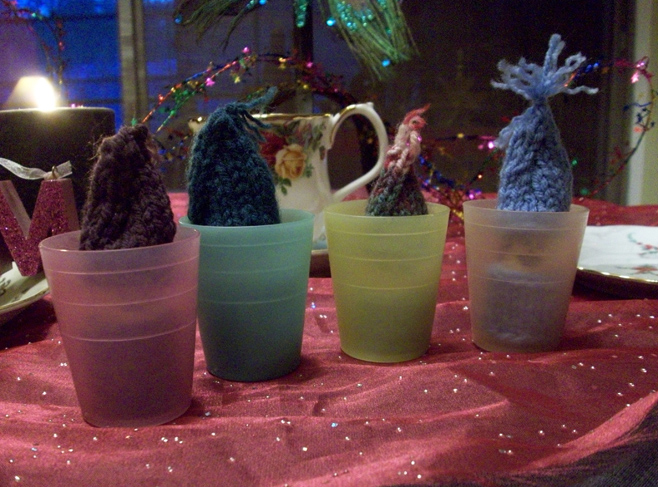 Oh yeah. I went there.

I got the scamps out of their cups, and they started noticing the table setting. There were three extra cups set out… 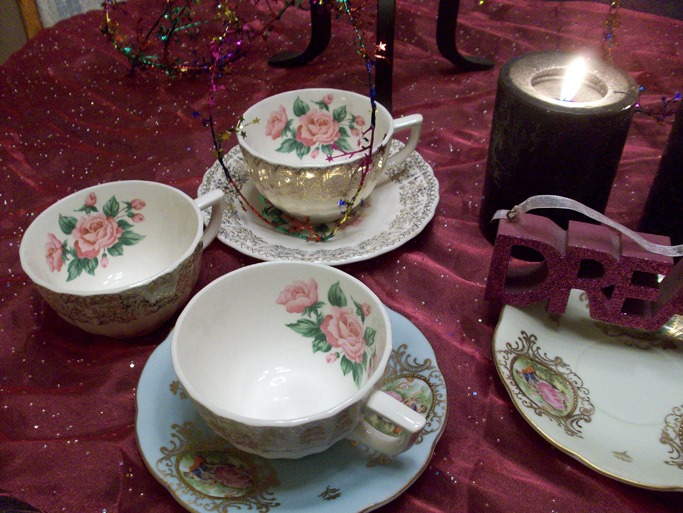 Who else was supposed to be at our table? I know lots of other parties are happening right now, but everyone has their own magic portal, and we thought it was just us in this one.

Then Katie Kork saw movement, and suddenly there was something lying on the table that wasn’t there a moment ago… 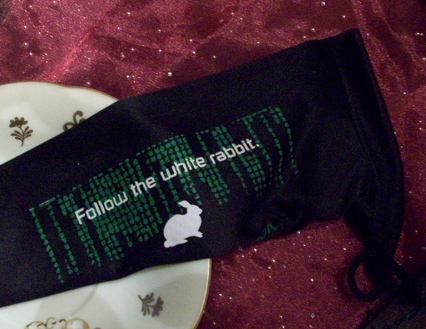 Wait, a strange message? To follow the white rabbit? I thought we already did that! Well, we followed his rabbit hole, anyway, and through the magic portal…

The Korknisse looked at each other, and at me, and then suddenly there was a flash! 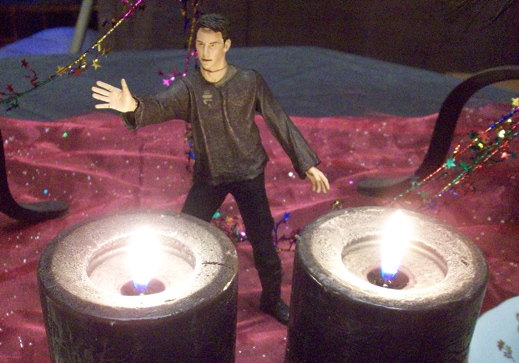 The Korknisse squealed in delight and then I recognized him! It was NEO from THE MATRIX! Ooooh! He was going to show us how he is able to bend spoons, dodge bullets, and fun-est of fun, his ability to command the candle flames!

The Korknisse & I got comfy to watch the show: 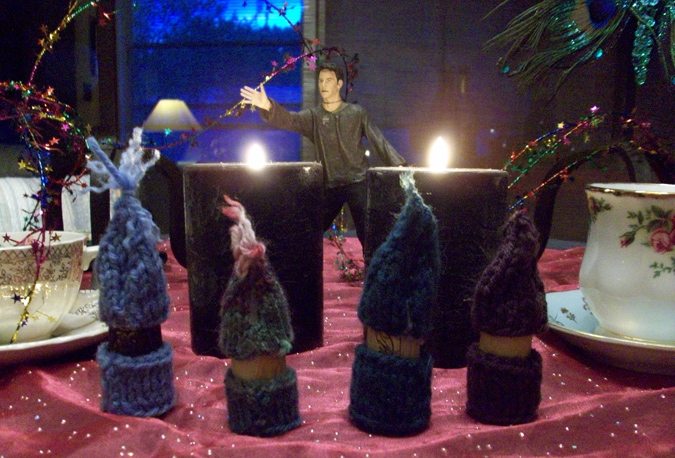 After that, we were decidedly peckish, so were ready to dive into the amazing treat that the party hostess had prepared for us…a lime trifle!!

Ok, it doesn’t really look like a typical trifle, but nothing down the rabbit hole looks like what you expect…

But to say it was the most sublime thing I’ve tasted in awhile is putting it mildly! Yum yum yum! Perhaps it tasted so good because it was eaten at a mad tea party? Who knows…but I will definitely come back to have more of this!

As we were digging into the trifle, we heard commotion, and another guest arrived! 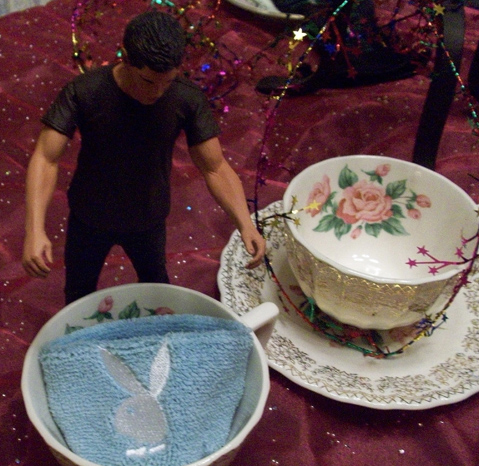 Well I’ll be! It’s Jacob from TWILIGHT! Looks like he followed a different kind of white rabbit.

Sorry Jake, there’s only me & the Korknisse here…but we do have tea and lime trifle!

He said, “You had me at trifle…and pass the tea!” 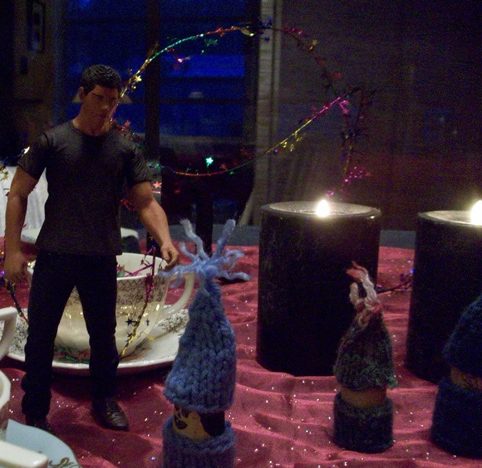 Katie Kork was all aflutter—and I gotta say, so was I, that Jake is a cutie!

But then we heard a discrete cough, and turned to see the third party guest of the day! 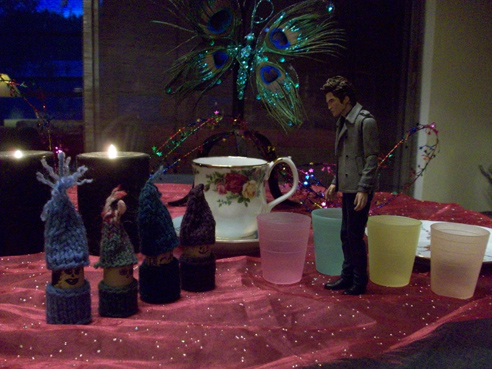 Why if it isn’t Edward himself!

The Korknisse were jumping up and down with delight. This was the strangest, fun-ness-est, maddest tea party they’d ever heard of!

They were so excited, they said it was time to Futterwacken!

In case you’re not sure what that is, here is the Mad Hatter showing how its done:

And everyone agreed that it was time to dance.

(Sadly, there are no pics of me doing the Futterwacken. They tried to take pics, but I got the camera back in time.)

Sadly, all parties must come to an end, including this one. I wanted to stay and hang out with Neo, Jacob, and Edward, but the Mad Hatter himself came by to say it was time to head home, because the magic portal was going to close soon.

Thank you so much for reading! The Korknisse and I had a blast, and we hope you did, too! I’m off to visit other parties all day…let the muchness fun-ness continue all weekend!

Find all the other parties on Vanessa’s site!

Muchly and madly yours,
Sara

In keeping with my post a couple of days ago about my new mermaid fascination, I went and made myself...