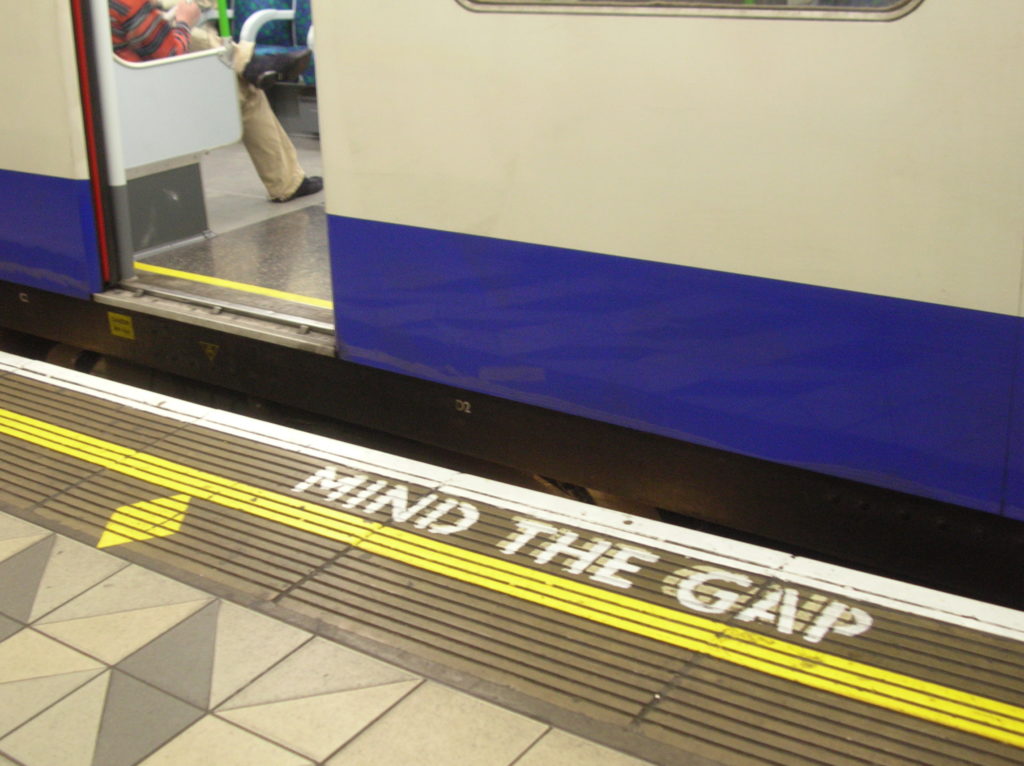 In England, all the tube stations have signs and disembodied voices repeating the refrain “mind the gap!” over and over, warning people of that space between the train platform and the train car. That they so consistently and unceasingly remind people to “mind the gap” says that that gap is dangerous. Beware, lest you fall. If there is anything you don’t want to not mind, it’s that gap. Beware the gap. Mind the gap.

I get it. Gaps are scary.

But not those kind. Train platform gaps are cakewalk. You step over them, and voila, no problem.

But there is a worse gap to deal with. The kind of gap that exists in your mind. The kind of mental block that can appear smack in the middle of your path while you follow your dream, effectively cutting you off from further progress because, you know, it’s a gap. Without a way across, and no edges in sight to either side.

Ooooh now we’re talking scary stuff, at least to me, who has a hard time with large places of unknown depth.

Chatting about this over coffee with my pachyderm* friend

I have a doozy of a gap that I’m facing. Erma said we should discuss it, so I made coffee, and we did. I first explained to her that there is something I want to do, business-wise, which is several steps beyond what I currently do, and I have no idea how to do it. This was hard to admit, but Erma merely nodded wisely when I did. She already knew this, of course, but was happy that I now knew it as well.

Some days it’s dark and bottomless and like a void that seems impossible to ever cross, and some days it’s more like a huge valley between mountains. I can hear faint refrains on the wind of those on the other mountain having a grand ‘ole time, doing the thing I want to do, but here on my mountain I feel like Kathleen Turner in Romancing the Stone putting one foot tentatively on a skeletal, crumbling bridge that I hope won’t crumble beneath me. I step out, and it crumbles. Every. Time.

The skeletal bridge never works, because I have no idea what I’m doing.

Skeletal bridges might have worked on past gaps, but they don’t on this one.

This is the New, improved! gap. Gap 2.0. My current processing system is unable to compute a usable trajectory.

All that I know about how I got to this point, on the edge of this gap here on this mountain, is pointless. I need to get over there, across the gap, and I have no idea how. All my current tools lie here next to me, useless.

Erma said this normal, that all going-for-dreams journeys involve gaps. She suggested I spend some time accepting the fact that I have no idea how to cross. Just sit down right where I’m at, and be with the not knowing.

Don’t try to understand it or cross it or solve it or fix it or anything right now. Just accept.

I’m feeling antsy, and not trying to overcome this is hard. I want to cross that gap! But Erma merely shakes her large head, her ears rippling slightly with the movement, and smiles over her coffee cup. “Relax,” she says.

Easy for her to say.

She tells me that when I’m ready, I’ll figure out how to cross, but it won’t happen until I release anxiety over it and get ok with it existing. She said not to rush the process, and don’t force it. Just let it be.

I’m a very solution-oriented kind of gal, and admitting that I don’t know how to do something really rubs me the wrong way. But I admit it. I have no idea how to cross this gap. And although I’m not ok with that, I’m willing to just let it be for now.

Breathe in, breath out, on the edge of the gap, while minding it.

*P.S. If you watch the show Bones, did you catch the elephant reference in this week’s episode?

Brennan: “I’m avoiding what I would really like to talk about.”
Booth: “Why would you do that?”
Brennan: “It’s a difficult subject. It’s become one of those… pachyderms in the room.”

I got quite a kick out of that, since Erma’s been so chatty lately.