This post is part of the Elephant Coffee Klatch series, where I get to know my creative “elephant in the room” and invite you to join me by getting to know yours. Our “elephants” are those looming, unrealized dreams we harbor in the back of our minds, the ones we try to ignore but that won’t let us be. The Klatch is about making friends with that elephant and then either pursuing the dream or letting it go, with love. Read more about the Klatch here.

Last month I confronted my elephant, named her (well, she named herself), and opened my awareness to how my elephant makes herself known. My elephant is my dream of writing (and publishing) a novel, and her name is Erma. Here is Erma’s current physical incarnation: 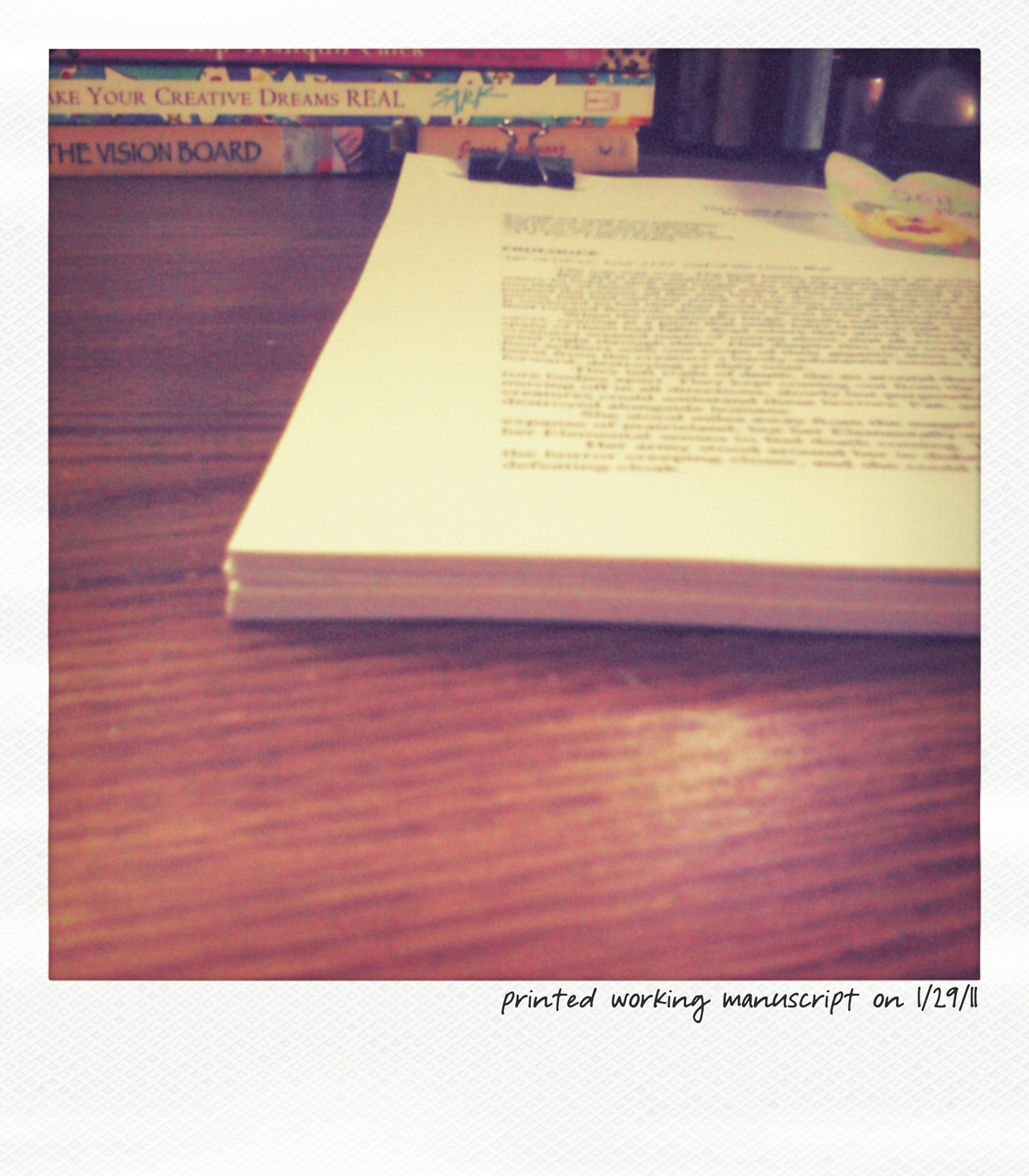 I did work on the book a bit in January, and printed what I have so far, and created that image. I have this idea to photograph the book’s progress, the manuscript growing, because despite the fact that I write words, I’m a visual person. I can look at a word count on my computer, but nothing speaks to me as much as a picture of what I’m creating.

Erma was quite happy when I did this visual representation, although her joy at my attention to the dream was short-lived because I put the manuscript aside and have not worked on it since. But I’ve gotten almost daily reminders of it. Erma likes to tickle the inside of my head with her tail every time I read about someone being published, doing a book tour, signing a publishing contract, achieving amazing self-publishing success, having a book do so well that it gets made into a movie, and even when someone publishes an ebook on their site.

And I’ve read about all of these things in the past month. Erma’s been increasingly restless: Swish, tickle, swish, tickle.

My first thoughts upon reading any of the above examples: Why not me? Why not me?? I want that!!!

Second thoughts: Well, stupid, finish the damn book, and maybe you could have some of that.

Fourth thoughts: How can I work on my book when I have other work to do (that makes money and keeps food on the table)? Writing is wasted time that might never bring in a livelihood! I have to spend my time making money, not frivolously writing a book no one may ever care to read!

And that, friends, is one of my big boulder-sized blocks sitting in the middle of the road to my dream.

When I first decided, way back when I was a child, that I wanted to write a book, I certainly never considered things like the time it takes to actually write one, the trade-off required to take the time to write it, and the sacrifices I might have to make in order to write it. I was young and just thought hey, writing a book would be a neat thing to do! I’ll do it! And even as I got older, I still refused to think about the details of actually achieving the goal.

But as I’ve matured and done a lot of self-help and reading up on goals and dream-chasing, I came to understand that achieving a dream means defining it and breaking it up in smaller steps to make it happen—you know, the details of it, those things I never wanted to look at in the past. And once I came to really understand what the details entail, I realized all that it would take to actually write a novel.

And I did a Keanu impersonation: “Whoa.”

So as I sit with my current concerns, about how can I “justify” all the time it will take to finish my novel and all that, I’ve been thinking about who I am now and if the current me still likes the idea of the end result enough to go through what I’ll need to go through in order to reach it.

Current answer: I think so.

Because Erma keeps swishing and tickling my mind every time I read about others’ book-creating successes. If I didn’t still resonate with this dream, Erma wouldn’t be bothering me. I can think of other dreams I had in the past that I’ve let go, and when I think of them now, I don’t feel much for them. I just think, “Oh, I remember when I wanted to do that…” and then think of other things. With the book-dream, I get this anxious, irritating tickling in the back of my mind that is clearly telling me get to work on that, willya?

Now to ponder all of this.

Off to refill my coffee mug,