Wow, what a fun day we had at the Carnival Soiree (event posts are on the main page, here)! Here are the highlights!

I rounded up all the Korknisse who wanted to go today, and Bast too, and we headed out to pick up the gnomes. They were already waiting in one of the magical gardens, so they climbed aboard our little magic wagon and we were off!

Once we arrived at the site, we headed down the Path of Illumination toward the smell of kettle corn and cotton candy and pizza. Mmmm! We also noticed animal smells and a bit of acrid smoke…probably from the human cannonballs we kept seeing go flying by in the distance! Coupled with the myriad blends of carnival music wafting in the air, making us want to tap our toes and start dancing right there, it was the perfect setting. Lots and lots of tents and rides and all manner of strange and fascinating things to see! Everyone wanted to do everything first, and we wanted to be sure to see it all, so after we got our tickets, we picked a tent and started exploring.

On the way to the first tent, we saw a curious little pond near a sign about the Fiji Mermaid. Could this be a place to spot her? The gnomes and two Korknisse went to investigate… 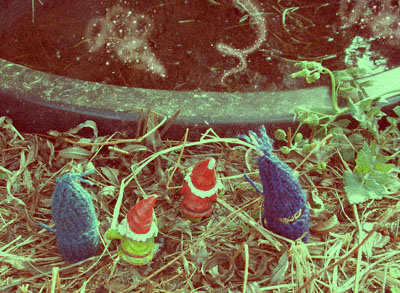 But they didn’t see anything. A few ripples on the water’s surface, but that was all…hmmm…

Disappointed but oddly excited, they all skipped into the next tent, where we learned all about the Fiji Mermaid. The gnomes and the Korknisse just had to get their picture taken in front of a Magical Mermaid Water Fountain, where sipping the water is said to give one the ability to see mermaids all the time! 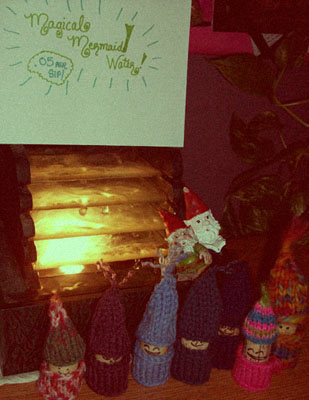 Everyone sipped—the gnomes double-dipped!—and then they raced back outside to look in the little pond again. No one would tell me what they saw…

From there we went through a few more tents, then it was time for the fortune teller! Even I was excited about this one. The gnomes weren’t as interested, and they went back to the mermaid tent while we all went in for our fortunes.

Mistress Mellie was her name, and she swooped us in, had everyone gather round, and lit a candle while chanting mystical words. Her crystal ball was actually all glitter! Quite fancy, it was. She spread her tarot cards out on the table while the Korknisse giggled and watched…

…and pulled a card, the Seven of Swords! It was a lovely card, with a gypsy, a ship, a great blue heron, and a rocky shoreline. In a soft yet powerful voice, Mistress Mellie told us it meant… 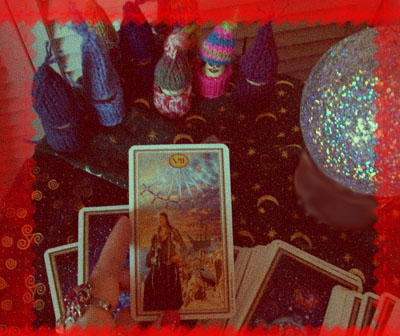 Ok, it was a bit melodramatic, but the Korknisse had a blast. :-)

Bast wasn’t thrilled, though. In fact, she was so happy to curl up in that tent that I didn’t see her for most of the rest of the day! 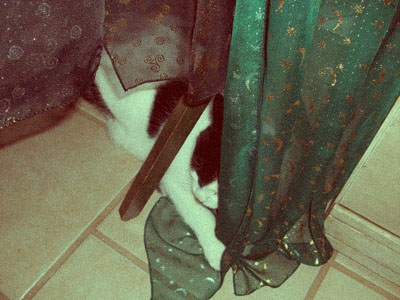 After all that, whew! It was time for lunch! I promised them junk food, so pizza was the unanimous decision:

We filled up on pizza, then proceeded to the trapeze tent. Wow, what a show! Trapeze and fire-blowers! We were not allowed to take pictures of the event, as this show is high in demand and the acrobats do not want their moves copied!

After all the death-defying moves, we wandered around a bit, and made our way to a small yellow tent.

Inside, the Korknisse were treated to some fun magic tricks by one of the original tricksters, the White Rabbit! But alas, every time I tried to take a picture of him, he’d turn to brass! Tricksy, tricksy! 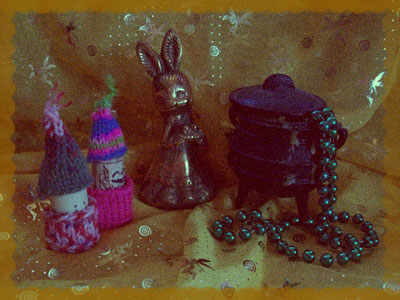 Before leaving the yellow tent, the White Rabbit told the Korknisse to look in the Magic Mirror…and oh boy, they had fun with that!

Then we came to the highlight of the day: the Green Tent.

We all wandered into the dimly-lit tent, not sure what the attraction was, since the sign outside only read, “Treasure.” The tent held nothing but a little box: 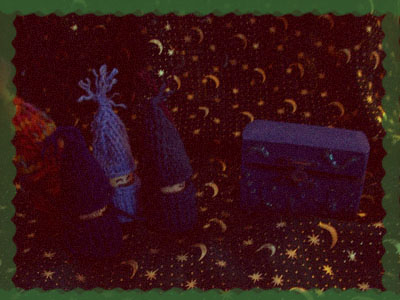 A somewhat plain little blue box. Nothing too extraordinary about it, except for some glitter (and glitter on anything is always a sign of something good!):

We opened it…and nothing. 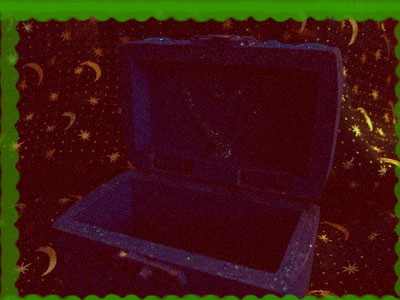 We looked more closely…nope, nothing but an empty box!

It was peculiar, to say the least. The Korknisse giggled a bit, thinking it was a fun joke. Calling the tent “Treasure” and putting an empty box inside! Hahaha! 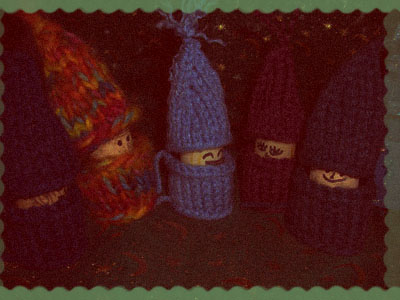 A tinkling, as if faeries had arrived. But since the faeries we invited had declined the invitation, we knew it couldn’t be them.

Then more sounds, muffled thumps and bumps and shuffling and suddenly the Korknisse, and, I have to admit, myself, were getting jumpy. We turned to go…

…and a flash caught our eyes…

Suddenly, the box was full of treasure! 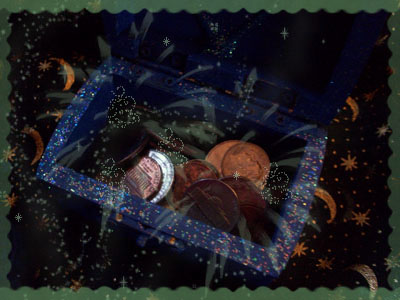 We oooh’d and aaaaah’d and laughed and gathered around the box, unsure of what had just happened! The gnomes came rushing in at just that moment, having been looking for us, and they were all excited about the treasure, too! Hmmm…was this the tricky situation that needed preserverence as foretold by Mistress Mellie? Oh well, who cares! We found treasure! 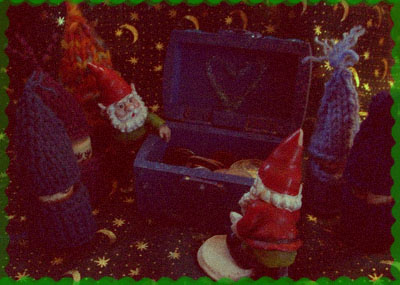 We somehow knew that each of us was allowed to take one piece of treasure as a gift of the day. Yay, what fun! I took a glitter-covered coin, since as I mentioned, glitter is always a good sign:

And after that, it was time to head home. We did do lots more, but I just don’t have room to share all of it…but it was quite an amazing day.

Thank you SO much to Lisa at Faerie Enchantment for hosting this wonderful event! We will be back next year! :-)

I hear strains of circus music…

...as I prepare for this Saturday's Carnival Soiree at Faerie Enchantment! Whee! I'm so excited; this is my first time...